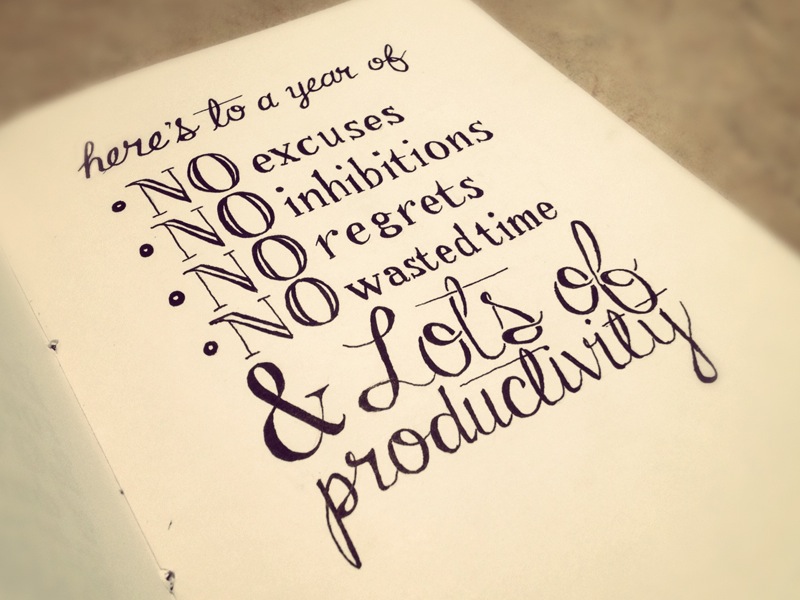 As entrepreneurs, we’ve all been there. Maybe you’ve been working on your idea full-time, or maybe you’ve been squeezing hours into your business on the side. Either way, one day you’re staring at your computer screen late at night, with what feels like an insurmountable mountain of work to be done, and you say to yourself, “how the f&%* am I going to get all this done?”

If you haven’t experienced this yet, congratulations, you now have something to look forward to.

Everyone in the world is given the same amount of time. In the next five years, someone will go from idea to billionaire. They will do it in the same five years that you have. The question is: What are you going to do with those 43,829 hours?

With that said, here’s a list of five things you can do to MAJORLY improve what you get done. This is for your business, but also for your life. They seem obvious, but I can promise you that most people reading this are guilty of one if not all of these. I certainly used to be.

NUMBER 1: Prioritize. Then do something important first thing in your day.

For most people in the working world, prioritization is easy. You get told what to do, and then you go do it. You have discreet work tasks, you know when you’re finished and your boss applauds or lashes you accordingly.

But you are not some cubicle monkey – you’re an entrepreneur! No boss, no one telling you what to do, no discreet clock-in and clock-out time, and no end to the myriad of possible strategies and tactics you could try to execute on to grow. Cue the sleepless nights and hair loss.

So how do you deal with this?  It’s simple really – prioritize, then execute.

Step 2 – Rank your list based on each task’s expected value.

Step 3 – Break each task down into roughly 90-minute discreet sub-tasks.

Step 4 – Complete your top two tasks each day. Complete task one as soon as you wake up.

Now some of you are thinking, “Only two tasks each day?! That’s only 3 hours of work! You can’t build an empire like that!!!”

Forgetting for a second that building an empire is a bad primary goal to have… Think Star Wars.

(I want the monies!)

You’re always going to end up working more than this during your day. Emails, maintenance, fighting fires – things come up when you run a business that you don’t expect.  But even if your list is 100 items long, if you just keep hacking away at two items a day, you’ll be done in less than two months!

Now, why do them first thing in the morning?

As Mark Twain said, “Eat a live frog first thing in the morning and nothing worse will happen to you the rest of the day.”

Why listen to Mark Twain?

Because he is awesome!

NUMBER 2: Create sacred space for work (WITHOUT Facebook or email).

Okay, so you’ve created your to-do list and you’re ready to get cranking! But first, let’s check email for just one second and see if anything interesting came in…

…An hour later, you come out of an email-induced blackout, no sense of accomplishment and no major steps taken in the business.

This one is going to sound familiar to anyone who’s read anything by Tim Ferriss, yet how many of us do it anyway? I certainly didn’t. After all, I’m a smart guy, I’m focused, and I won’t fall into the email black hole for an hour. I’m really just checking Facebook for a few minutes.

But those few minutes cost you more than you think.

It used to take my business partner hours to write a new article. But once he implemented this system, we realized he could get a high quality article out in a single sitting. He literally DOUBLED his productivity by putting a hard stop on Gmail and Facebook during his 90-minute work windows.

Again, some of you are thinking, “But Ben, that’s just an anecdote! Plus you guys could just be lazy, stupid, and ugly!”

Wow, words hurt folks. But putting that aside, you want research? Bam! Research.

I’m getting pretty deep into my word count here, so I’ll keep this one short.

There… now on to the next one.

Kidding! But seriously, stop drinking. A drink or two is fine, but no more fifteen drink benders, or at least save them for a special occasion. Not only will this potentially save you a ton of money, but also the lack of hangovers will totally transform your weekends. Now instead of rolling around in bed all day feeling sorry for yourself and watching re-runs of How I Met Your Mother, you’re up at the crack of noon and being productive!

If you’re still not convinced, read this.

I’m going to give you Time Miracle-Gro.

This secret will extend your life, your waking hours, by 31%.

What do you have to do? Just turn off the TV.

It will make you fitter, healthier, happier, more alert and give you more energy.

And There You Have It…

Five ways to massively increase your productivity, get more out of each day and build your business faster. They may seem obvious, but before you shrug this advice off, really take a minute to think: you know this advice is obvious, but do you follow it?

Ben Altman is co-founder of Charisma on Command. He currently lives in Rio de Janeiro and spends his days writing, coaching and enjoying life on the beach.